LITTER BOOM TO STEM THE TIDE OF RIVER POLLUTION

A litter boom installed across the Ohlanga River over the long weekend, was put in place to lessen the volume of river pollution that flows down the river ending up in sea and on the beaches both north and south of the uMhlanga Lagoon.

Visible on the sea side of the M4 highway, and not to be mistaken for a fishing net, the litter boom has been installed to intercept floating litter; principally plastic packaging, which pollutes our oceans, river systems and beaches. This litter emanates principally from N2 and M4 Freeway stormwater runoff and from the communities upstream. 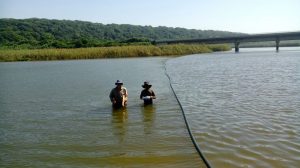 The boom has been carefully designed to work with river currents, the prevailing winds, to cope with flood conditions and to be as unattractive as possible to vandals. It is fully serviceable and will be cleaned as part of a roster set up by the uMhlanga Urban Improvement Precinct (UIP). Litter collected here will be recycled where possible or sent to landfill, and data on refuse collected will be used to inform a city-wide effort to stop ocean-bound plastic.

“Litter always covers our beaches after the rains and we had been looking at possible solutions to intercept some of it at the beach stormwater outfalls.  Then we came across a recent article regarding litter booms that had been successfully deployed on the Umgeni and Seekoeispruit River systems as part of the initiative to keep plastics out of our oceans by Durbanites Against Plastic Pollution (DAPP) and  Durban Green Corridoor; an eThekwini supported NGO .We made contact and they were immediately supportive of a partnership whereby they would provide the expertise and we would engage community support and raise the required funds,” said Andrew Fraser, Chairman of the Upper Umhlanga Security Trust ( UUST).

The UUST approached the uMhlanga UIP for support, part-funding and future cleaning. “The UIP loved the idea of the boom, particularly as it will help control the litter flow onto our beaches and the time required by our staff to clean,” said UIP precinct manager Dewet Geldenhuys.

Plastics SA, were also hugely supportive and engaged the support of one of their members, DPI Plastics, who generously donated the long length of hdpe pipe required. The local Umhlanga community initiatives of Park to Park, uMhlanga Manors and the UUST generously provided the balance of funding and the litter boom became a reality.
In celebration of World Oceans Day on Friday the 8th June, the collective will be officially opening the boom and on Saturday 9th June with a community beach/ lagoon clean-up. More details on social media to follow.